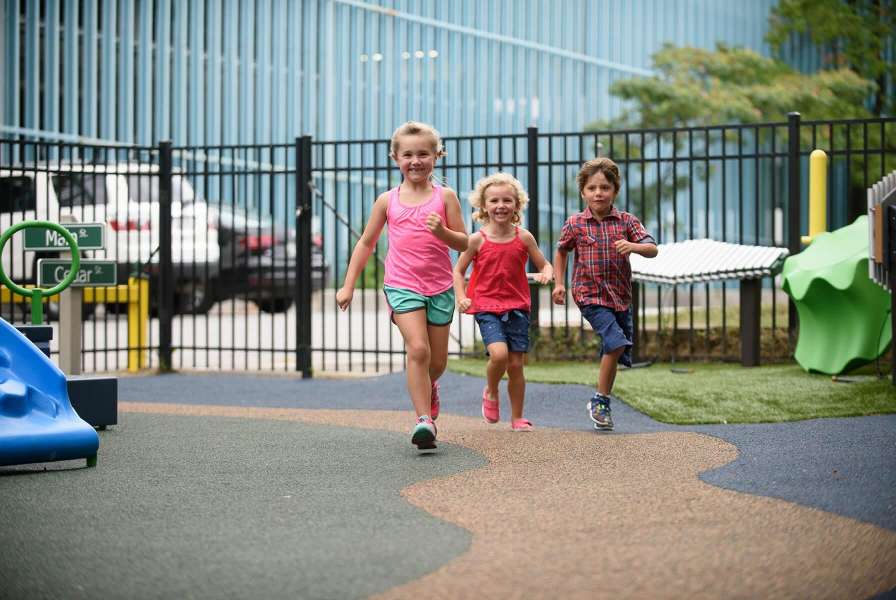 Research supports the developmental benefits of playgrounds and free play opportunities at home, school, and the community. Choosing a compliant playground surfacing under and around playground equipment is one of the most important factors in reducing the likelihood of life-threatening head injuries. Surfacing under and around playground equipment has been a story of historical evolution which has led to the variety of options available today and standards for surfacing to help protect children at play. 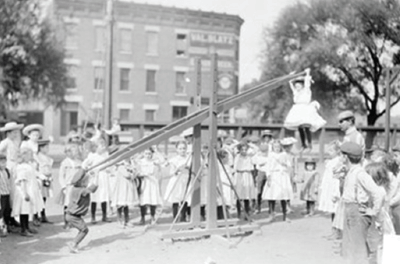 Since the initial period of time when playgrounds were developed in American cities as a reaction to the industrialization of America, people have been concerned with playground safety. In those days, playgrounds were often large metal contraptions resembling gym equipment, often 15-20’ above ground. Surfacing generally consisted of sand, screened cinders, and clay, or combinations of the above, which were rolled until packed solid.

By the 40’s and 50’s asphalt was by far the most popular choice, as it prevented hard packed earth and sharp protruding rocks in heavy use areas, or the dust bowls commonly occurring with loose fill surfaces of the day. No distinction was made between general play areas and areas under equipment. By the early 50’s both the Firestone and Goodyear Companies respectively created rubber powder and pelletized rubber for the playground, which when installed at 3/8” depth. Though it did not likely provide adequate fall attenuation, it did set the stage for the development of more effective rubber surfaces in later years. 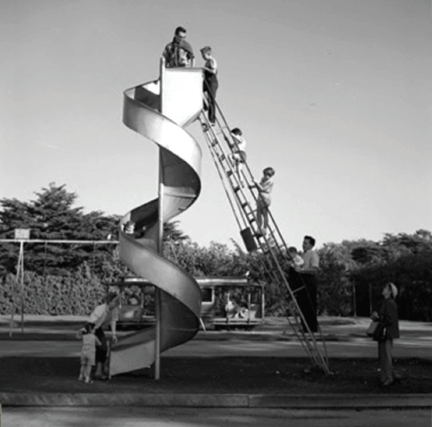 In 1969, the Committee on Accident Prevention of the American Academy of Pediatrics met to prepare voluntary standards for playgrounds. The draft was sent out to members for comment, but it was not adopted, and the effort was abandoned in 1971. In 1972, the FDA Bureau of Public Safety issued a report.

In 1978,“Public Playground Safety” revealing a dismal picture of playground hazards, and The National Electronic Injury Survey System (NEISS) issued its study of playground injuries treated in U.S. hospital emergency rooms, which indicated that the majority of serious injuries were the result of falls from equipment. These were primarily falls to the playground surface below the equipment rather than falls from one part of the equipment to another part. In 1976, the National Recreation and Park Association submitted a draft of a standard to the CPSC that contained a section on “Surfaces Under Equipment.” The CPSC recommended additional research, by 1980, the commission terminated the work on a mandatory standard and decided to publish a handbook of playground safety guidelines. Although the resulting handbooks, published by the CPSC in 1981, had shortcomings, they were the most comprehensive guideline available to date.

In September 1986, ASTM F08.52 held an organizational meeting for a task group on Playground Surfacing. The task group eventually became ASTM F08.63 on Playground Surfacing Systems. CPSC staff provided input to the new subcommittee in terms of participation in round robin testing (1988) and support for the evolution of F 355, Test Method for Shock-Absorbing Properties of Playing Surface Systems and Materials, into ASTM F 1292, Specification for Impact Attenuation of Surfacing Materials within the Use Zone of Playground Equipment.

In 1990, CPSC staff published a report on impact attenuation of playground surfacing materials for seven loose-fill materials using the then-draft requirements of ASTM F 1292.This work was used in the development of a table of critical heights of these materials, which eventually became Table 1 in CPSC Publication Number 325, The Handbook for Public Playground Safety. Subcommittee F08.63 adopted the criterion as part of F 1292 in a 1993 revision to the standard.

In 1998, the National Program for Playground Safety provided data to the CPSC staff on materials similar to those in Table 1 that yielded consistently higher critical heights for materials. One of the primary differences in the NPPS-sponsored testing was the use of a larger box to contain the loose-fill materials. CPSC staff revived its surfacing project and retested some of the same types of materials that were in the 1990 report. This testing produced values that were generally between the 1990 CPSC data and the 1998 NPPS data. CPSC staff concluded that box size, material handling and instrument set-up were variables that affected the test results. In 1998, CPSC staff summarized its work to ASTM F08.63.

The resulting efforts of a subcommittee task group produced a significantly revised standard in 2004. The new standard addresses all of the issues raised by CPSC staff in addition to many other issues raised by the task group in examining the standard.Today, all states follow one or both of these guidelines when creating a playground specification plan. Check with your local government for the appropriate reference tool to use in your area.

Learn more about surfacing options and planning information by requesting our program, Strong Foundations™, or read more on our solutions page!

Learn about our surfacing options and planning information by requesting our program. 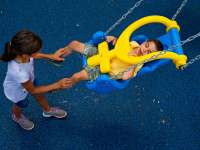 The Right to Play on an Inclusive Playground

Communities are recognizing the value and need for inclusive playgrounds creating a powerful energy to help children of all abilities enjoy their right to play! 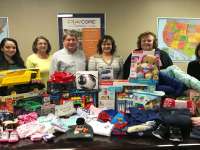 Robertson Industries sponsored a family for the holidays via The Society of St. Vincent de Paul’s “Adopt-A-Family” Christmas program.