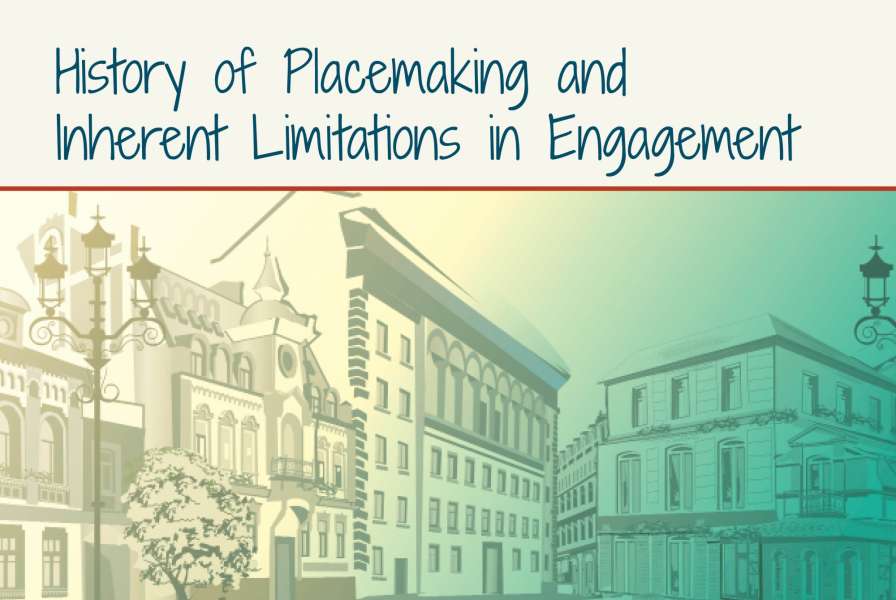 IN VERY BROAD TERMS, the turn of the 19th Century saw the emergence of urban planners and designers of the built environment as new professions. The industrial revolution created wholly new landscapes and a need to rethink how urbanizing western cities and communities should be organized. Real people lived real lives in and amongst factories, green grocers, tenement apartments, livery stables, train yards, school houses, and slaughterhouses. New industries literally grew overnight, leading to rapid urbanization, but also pollution and often inferior infrastructure. All of this was made worse by disease, crime, and political discontent. The need for social and spatial reform, to ensure community health through the separation of industry and factories from people’s homes and schools, led to the emergence of visionaries of the urban form; people such as Ebenezer Howard, Frederick Law Olmsted, Baron Von Haussmann, and Daniel Burnham advocated for neighborhoods with doctors, shops, and schools as well as safer factory environments, and public parks offering clean air, access to nature and socialization, and recreation for the entire community

Their revolutionary ideals transformed the way cities were developed, literally saving millions of lives, transforming both urban and rural landscapes, creating access to clean water and nature while supporting continued industrialization. This grew the professional field of design and the management of urban environments to one of “expert,” and the bureaucratic role of land use, zoning codes, building codes, and designers as the caretaker of health, safety, and welfare was born.

These useful solutions to ever-growing problems were not without their own challenges, leading to greater issues in the following decades. Municipalities treated the modern visionaries of city-making as authorities in the field, producing and reproducing their ideals in diverse settings and spaces without considering the unique sets of topography, landform, histories, or cultures that would remain and impact the overlay of the “ideal.” In the United States in particular, the wide separations of uses such as industrial areas and residential neighborhoods in addition to Ebenezer Howard’s call that every resident should require access to small private greenspaces and single-family homes led to the development of low-density suburbs. These suburban areas limited social activity and cultural interaction and favored expensive personal transportation options over consolidated and less expensive public transportation. This in turn brought only people with the means to afford private car ownership, and neighborhood elitism based on personal wealth, eventually leading to discriminatory housing practices. Daniel Burnham’s regional transportation ideas were abused by Robert Moses as he divided urban neighborhoods with highway infrastructure making room for more and more cars to enter and exit quickly from the suburbs. Le Corbusier’s demand for social housing was misappropriated into unmaintained public housing infrastructure such as Cabrini Green and Pruitt Igoe-which publicly failed as they filled with the most vulnerable and marginalized people, began to be symbols of urban blight, and were subsequently demolished.

These challenges led to a new level of awareness and an emergence of grassroots planning and architecture in the 1960s. As the urban centers in the United States were being dominated by Urban Renewal planning, a process that included the razing of historic downtowns, areas perceived as blighted and/or economically disinvested were considered a “blank canvas” for opportunities with perceived higher economic returns. Rural farmland was also being taken in favor of sprawling, low-density development. It was here where revolutionaries such as journalist Jane Jacobs and sociologist William Whyte noticed the inequities and detached urban form and called for different and new approaches to the profession. 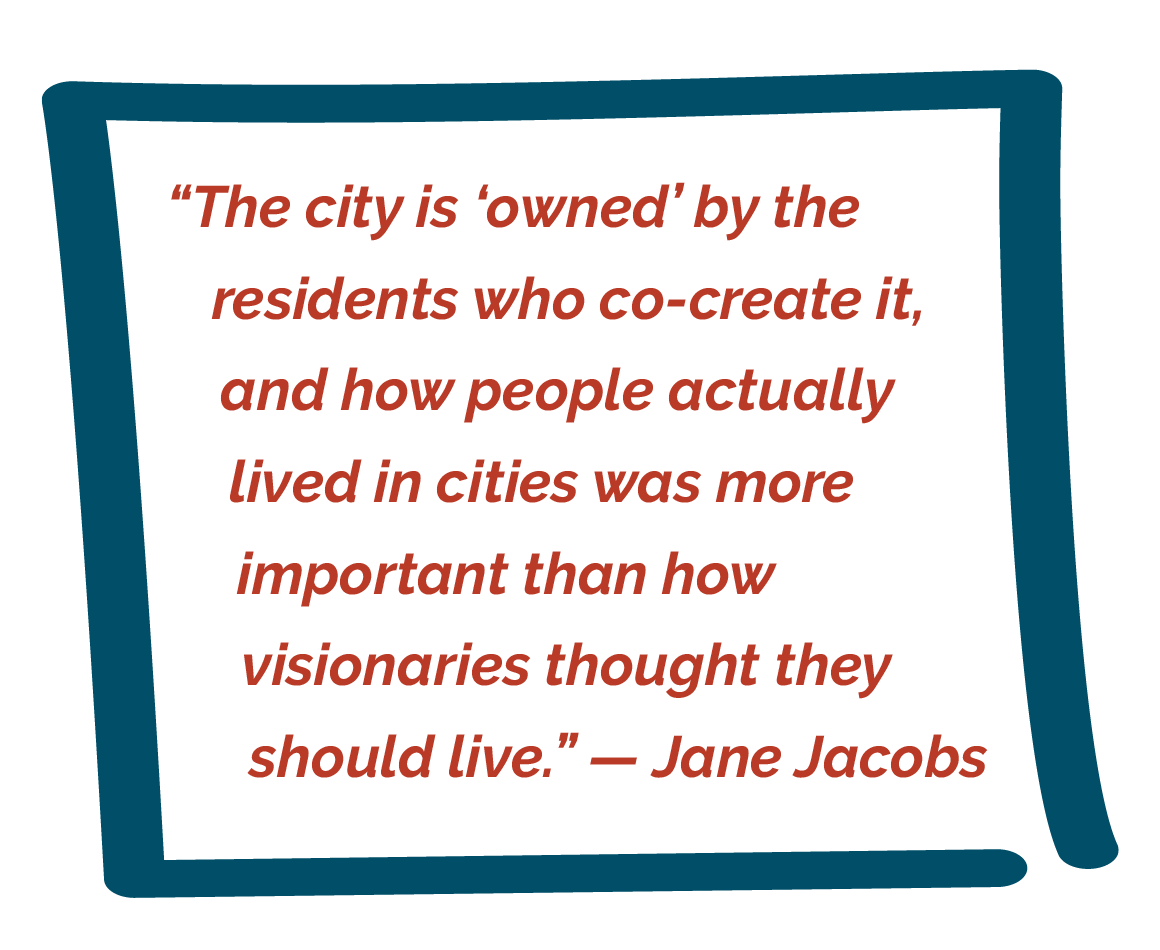 Jacobs revered the inner city neighborhood which she saw built a sense of community through social interaction and neighbors. In her book, she noted that the city is “owned” by the residents who co-create it, and how people actually lived in cities was more important than how visionaries thought they should live. Similarly, Whyte, while working for the New York City Planning Commission, literally sat and watched people interacting in and with spaces. These observational studies, which spanned years, documented how very different actual human behavior was from conventional expertise in the areas of engineering and public safety. He is best known for his observation that our human social life in public spaces contributes not only to the quality of life of individuals but the quality of life for society as a whole. These studies, writings, and ideals transformed the approach to planning and architecture throughout the design professions. Jacobs and Whyte’s insights favored a “bottom-up'' approach to creating communities by way of understanding environments through inquiry and a person’s use of space. This consideration for human behavior reshaped the profession on a grand scale and introduced conversations on community engagement.

As a result, we know that successful placemaking is important for a variety of reasons. By creating places where people can participate in the ways they prefer, they are more likely to stay, return, and spread the word. A great public space creates a feeling of belonging, camaraderie, pleasure, and joy. This doesn’t happen without careful listening. In the decades following Jacobs’ and Whyte’s work, the design world made great strides in moving past “expert” and asked the community to be involved in the design and planning process.

The difference between space and place is like the difference between ‘house’ and ‘home’. Many tangible and intangible elements combine to create a memorable experience. Good placemaking demands that we consider the end-users by inviting them into the conversation as an important part of the design process. It requires decision-makers to have genuine regard for long-term success and social, cultural, environmental, and economic sustainability. As users and advocates in placemaking efforts, we relish the opportunity to empower communities; engage in meaningful dialogue, facilitate opportunities to listen, and empower communities and design professionals to see possibility all around them. 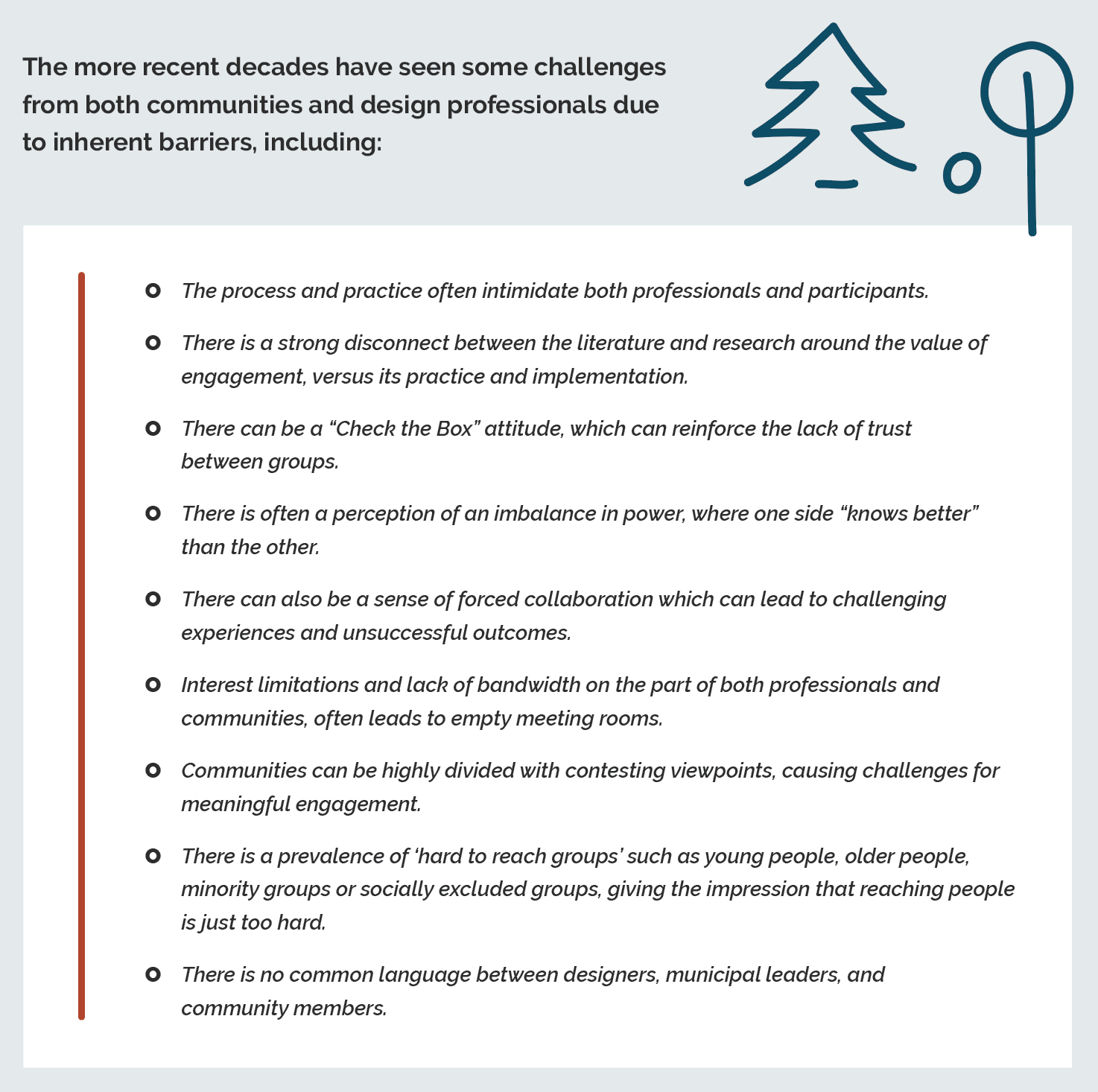 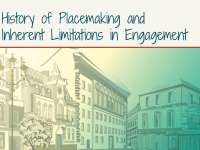 By creating places where people can participate in the ways they prefer, they are more likely to stay, return, and spread the word. 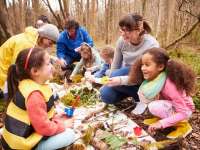 Play environments should be viewed as resources for learning & child development. Consider bringing learning outside through activities that interest children. 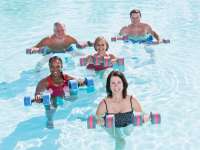 Aquatic immersion and exercise has been shown to improve brain blood flow and arterial health.